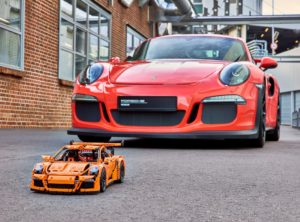 LEGO Technic and Porsche are officially ceasing production of the 911 GT3 RS 1:8 scale model, which was initially launched back in 2016. Thankfully, its replacement is being described as “a new treat”. To make this a proper send-off, the two companies released images of one of the final LEGO Technic 911 GT3 RS sets as it “rolled off” the automaker’s Zuffenhausen assembly line, almost as if it was a real Porsche.

“LEGO Technic lets fans of iconic sports cars such as the Porsche 911 GT3 RS to Build For Real – and what better way to send off one of the final versions of this fan favorite set than to have it roll out of its spiritual home in Stuttgart,” stated LEGO Technic brand manager, Nicola Mellor. “Fans looking to get their hands on one should zoom out to pick one up now – but Porsche fans should keep an eye out for even more exciting, authentic LEGO Technic builds in 2019!”

What makes the 1:8 scale model special, apart from the fact that it’s comprised of 2,704 pieces, are features such as its orange bodywork, red suspension springs, detailed headlights, taillights, brake calipers and rims with low profile tires. It also comes with an accessible cockpit boasting a detailed dashboard, working gearbox, steering wheel with gearshift paddles, racing seats and a glove compartment where you can read the car’s unique serial number.

Other functions include the doors, which you can open and close) as well as the opening rear lid which houses a flat-six engine with moving pistons. 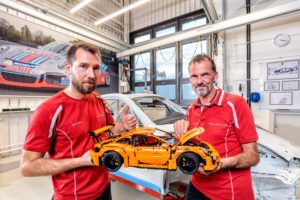 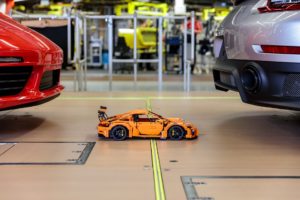