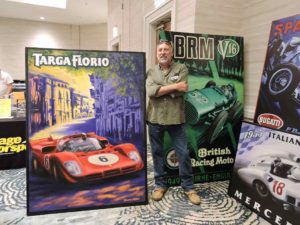 Robert Carter developed an interest in motorsports, classic cars and motorcycles at an early age.

At the age of fourteen, he knew he wanted to pursue a career in art.

Robert was allowed to leave school on Thursdays to explore London’s galleries and museums. At fifteen, he finished school to begin an apprenticeship in a commercial art studio, learning the basics of lettering, airbrush and design.

In 1971, Robert began working on a freelance basis for advertising agencies that had Ford and Chrysler accounts. He came to the USA touring on a BSA motorcycle, and soon became involved in auto racing, from pin striping cars to twenty-five foot murals on race trailers.

About 12 years ago, he began selling motorcycle art through Bonham’s and RM Sotheby’s auctions.

Robert’s paintings are oil on canvas, the paper and canvas prints are Ltd. Edit. Giclee, all available on his web site. He also accepts private commissions working from photographs in oils on canvas, spending between 50 and 80 hours per piece.

He continues to be involved in racing and is a member of the Ishi chapter of the Antique Motorcycle Club of America.

Robert has been working in art since starting an apprenticeship in a London Studio in 1967.  He now paints in Chico CA and currently has paintings in the Petersen, Wally Parks NHRA and the World of Speed, along with many private collections.

During this year’s Automobilia Monterey International Expo, Robert debuted a 48”x 60” oil on canvas showing Nino Vaccarella in the Ferrari 512, blasting through Campofelice, Sicily in 1970.

For more information on this talented artist please visit: