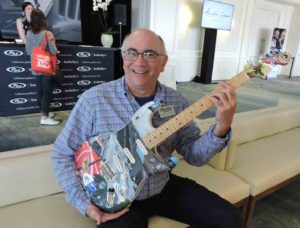 We met artist, David Snyder at Amelia Island Concours 2019.  Within the last few years, he has begun painting guitars for charity, raising as much as $105,000 for “Curing Kids with Cancer” at a recent Mecum’s Auction.  His latest endeavor (pictured here) was to raise money for The Amelia Island Foundation.  He painted all 7 cars in their class on John Oates Guitar, which began the recent RM Sotheby’s Auction during the Amelia Island Concours.  John Oates ended up being the highest bidder, keeping the guitar within his collection.  To reach David about his charity paintings or his art in general: